Saved Searches Advanced Search
All libraries are now open 3 days per week! Visit https://cals.org to see your branch's schedule. All returns will be quarantined for 4 days before they are checked in but no late fees will be assessed during that time.
Print 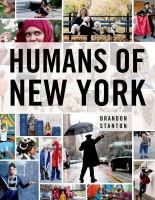 "In the summer of 2010, photographer Brandon Stanton set out on an ambitious project: to single-handedly create a photographic census of New York City. Armed with his camera, he began crisscrossing the city, covering thousands of miles on foot, all in his attempt to capture ordinary New Yorkers in the most extraordinary of moments"-- Provided by publisher.
Publisher: New York : St. Martin's Press, c2013
Edition: 1st ed
ISBN: 9781250038821
1250038820

More than just a coffee-table book, these are snapshots of genuine life in America that remind you that there is more to this nation than the wealthy and famous. America is comprised of a vast array people with very interesting stories - stories that are funny, sad, heartwarming, tragic, or nearly unbelievable. America is comprised of the mentally ill, the academically intelligent, the street smart, the poor, the multicultural, the non-traditional, the financially successful, the angry, the creative, the generous, etc. Let each story sink in and try to put yourself in their shoes for a minute. Look into their faces with empathy and leave your ego for few seconds.

Photography and descriptive interviews combine to powerfully convey stories of individual lives. Although I have never met the subjects, I feel like I know them now.

After first consuming "Humans of New York: Stories" (and loving it) I sought to read this earlier work which I adored while still feeling just a wee bit less satisfied by than the "Stories" one. You can see that he's onto something, but that something is more fully developed (thus marginally more satisfying in "Stories" than it is here. Still, both are excellent and though-provoking reads.

I'll add my voice to the comments on this wonderful book which I fully consumed in one sitting, staying up later than planned to do so. Each photograph plus accompanying text in just the right amounts is a story, a worthy and interesting story. I loved it.

A mesmerizing collection of photographs of the many New Yorkers Brandon Stanton has interviewed for his blog, demonstrating that although not all of us have lived a life worthy of a riveting biopic, there is something interesting and compelling to be found in everyone. The photos, presented alongside quotes from each individual, reveal our shared humanity; everyone one we pass on the street has a unique story, a history, thoughts and memories, just as we do. I applaud those unafraid to express their individuality, and I admire Stanton for having the courage to approach complete strangers in pursuit of this project -- the results are simultaneously inspiring, heartbreaking and adorable.

It's easy to forget that there are real stories inside the people that we find strange or unapproachable. Brandon Stanton has made it his mission to take those stories that hide within and make them visible to the rest of us.

New York is just one of those place, you know? Everyone owns their little piece of it and Stanton presents that to the world with his amazing photographs. This collection places fashion and eccentricities right next to everyday, quiet moments. You see introverts and extroverts in full display and people of all shapes and sizes. One of the quotes under the feet of a beautiful girl standing with a vintage looking travel case asks, "Are you going to make fun of me?" While in another a man holding a red cape says, "I didn't even start dancing tango till I was 62." It's beautiful in ways that can only be captured in photographs.

I love the work this guy does. Everyone has a story. Some good, some bad, some different. Always a good website to read and the book is basically a collection of the same people and segments.

It was as if you were walking the streets of New York, and having a heart-to-heart with your fellow man. Stanton's book is endearing and has a page for everyone. Eagerly anticipating his next release. :)

It takes all kinds.

"I tend to be cynical about a lot of things, but Maya Angelou is somebody that no matter how much I pick her apart, she still has integrity. She was a victim of incest and rape, and she worked as a stripper. And now she's a literary icon and Nobel laureate. It goes to show that life is cumulative, and you can't devalue any type of experience."

"I'm a philosphy professor. I tell my students 'never make an exception of yourself.' People like to make exceptions of themselves. They hold other people to moral codes that they aren't willing to follow themselves. For example, people tend to think that if they tell a lie, it's because it was absolutely necessary. But if someone else tells a lie, it means they're dishonest. So never make an exception of yourself. If you're a theif, don't complain about being robbed."

"If you could give one piece of advice to a large group of people, what would it be?" "Try your best to deal with life without medicating yourself." "You mean drugs?" "I mean drugs, food, shopping, money, whatever. I ain't judging anybody, either. I was hooked on heroin for years. But now I've learned that every feeling will pass if you give it time. So don't rush to cover them up by medicating them. You've got to deal with them."

readinJC thinks this title is suitable for 13 years and over

There are no summaries for this title yet.

There are no notices for this title yet.

Find it at CALS